Carlie was browsing online for a Marriage Celebrant and was getting a little frustrated during her search. She told me that she found Vows Now when she typed in “I want to just get married!”. I don’t know exactly how many exclamation points she used, or how hard she bashed the keyboard, but in my head the story has angelic harp music playing when our trademarked “Get JUST Married®” tagline appeared before her eyes… we were destined to be together!

From the first time I met Carlie and Tim, I knew they’d be an easy couple to work with. No fuss was exactly what they had in mind as their way of cementing a relationship that had given them 3 beautiful children and many years of happiness already. Their kids were so good during the meeting that I went home and told my husband that I’d just met the most well behaved children! Seriously!

On the day, they weren’t fazed by threatening black clouds over their planned wedding location. They just rang everyone and relocated the wedding to Tim’s parents house. No fuss! Their wedding ceremony was simple, surrounded by family and close friends and we had special ‘Kid’s Certificates’ for the 3 children to sign. The kids were involved, well behaved and had a special keepsake to take for news on Monday. Most importantly, I made sure that Carlie and Tim “just got married!”

Here are some lovely words they sent me afterwards. I’d show you the box of chocolates they gave me, but they went straight to my hips! (no one needs to see that!):

“Johanna is professional, helpful and extremely friendly. She acts like a friend rather than a stranger and made our wedding day much more special – as well as simple and fuss-free as we wanted!” 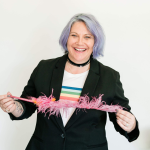